So I was reading a training post on vintagebmx.com today about core training. Although I agreed with the trainers reasoning for the importance of doing core training, I didn't fully agree with a few of the exercises he suggested. A few of his suggestions were probably not optimal, and potentially dangerous. I'm feeling like I should post on vintage a response to what I think would be a better and safer way of training the core, but don't want to come off as a dick and hijack his thread. I do feel it could be a safety issue so I do feel the need to post something.  So here is the trainers post that I wanted to respond to.

Yea, yea, I know you already do core work. Do you really? Are you doing the right core work?

Crunches, sit ups, plank work, hot yoga, etc., although good for you, and espeically good for those who are couch athletes with hurt backs and tight muscles - it's only maintenance work and barely scratching the surface.

Example...how much can you leg press? 4 million lbs? 5 million lbs? Probably...and it shows that most seasoned bmxers have some pretty incredible leg strength. But how come you can't squat half the amount of what you can leg press? Seriously?!?! Most peoples' legs don't give out on a squat. Their core folds over, right?

Now I'm not going to argue semantics, but the leg press is doing all your core work.

If you did some HEAVY core work, what do you think will happen to your squat? You guessed it, it will sky rocket.

Now how does this help a BMXer?
- bigger squat means more horsepower
- the stronger your core, the more your limbs (i.e. legs) can push off from - imagine that
- the easier it will be to lean back (and manuaul or have better sprint posture) as opposed to riding with your core over the bars
- you will become a chick magnet and all your wildest dreams with come true

Ok, Biggy Bird...what HEAVY core work should I be doing?
- Weighted Cable Ab Pull Downs (standing prefered)
- Banded Ab Pull Downs
- Sit Ups On A decline bench with weight on your chest or held behind your head (very advanced) - no need to go all the way down
- Kettle Bell Or DB side bends
- Landmines
- How someone toss a medicine ball back and forth while doing decline sit ups
- Banded side twists
- Front squat holds
- 1 arm deadlifts
- good mornings
- weighted planks (have someone put weight on you)
...is that enough for you?

I highly suggest you start with lighter weights, look this stuff up on the Unversity of YouTube. If one of these hurts your back or private parts, you have 10 more to choose from

I totally agree that most bmxers need to develop the core. I started working with a group of top level experts this summer. I was blown away on how 2 of the kids had such a weak core they couldn't do a proper push up. The other racer was having pretty severe back pains and needed to see a physical therapist. Then a few days ago I saw a picture on Facebook of another top 17-18expert that was going in for back surgery. This is crazy, It's not just an old guy problem.

I think first we need to establish what is considered the core. When most people think of core they think abs. But really core stiffness comes not only from abs but also hips, shoulders, lats, chest, back and even the way you breathe, and how they work together. I define core as everything from the junk all the way to the neck.

Next we need to think about how we actually move on a bike and adjust our training to suit these movements. When we do gates, manual or sprint, it is optimal to maintain good, strong posture. For example think about Kyle Bennett and the way he rode a bike. When you look at pictures of him you will notice he had extremely good hip mobility and was able to get extremely low over jumps. But the other thing I notice is while he's sucking up a jump or doing a gate start, his spine was almost always perfectly straight. This is indicative of having a really strong core. 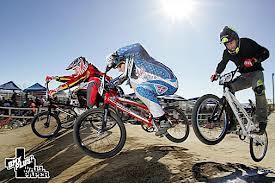 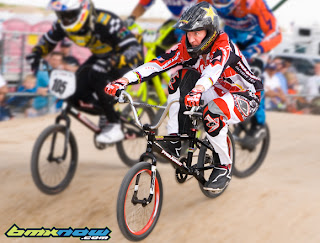 The cool thing about our body is when it senses core instability it tightens up to protect us from hurting ourselves. Think about walking on ice. When you walk across ice you take tiny steps and you're stiff as a board. Your body can tell it's unstable and locks up your muscles without you ever thinking to do it. This should be an important example of how the body works and why we need to create stability. Without stability you will never get the flexibility you need to ride a bike.

There's been a significant change in the way most coaches program core work recently because of some research that has been performed on pig spines. Dr. McGill basically put a pig spine in a machine that simulated ab crunches, and found out somewhere around 10,000 crunches the disc will start to bulge and herniate. Here's a video I found that much more eloquently describes how the spine works.


If you watched the video I think you might see why I have a problem with a few of the exercise suggestions from the other trainer. Heavy crunches, twists, and poorly performed good mornings can be really tough on your back. Another thing to think about is heavy back squats and the compression on the spine, but that's another post in itself. For my training I haven't done a crunch in probably 2 years and my abs and core have never been stronger, and I've never been more flexible. Well maybe when I was a little kid. Not only am I stronger and more flexible, but I rarely get any back pain after working out or riding my bike. I really think us racers need to consider how much stress doing gates and manualing jumps puts on our backs. It's really tough to get stronger and faster when you're in pain.


Below is a video showing a good way to check core stability. The video demonstrates the test pretty well and also shows a good example of some typical core weakness. Ideally your head, shoulders, and butt should all maintain a straight line while doing the test. You can lay a broom stick on those 3 points to check your form. If you watch the video you can see that this guy has some trouble maintain good posture.  To test, start with hands by forehead, and if you lose form move hands down to chin and re-test. If you still have problems move hands down in line with shoulders. If you can't do that well, you have some work to do.


Here are a list of some exercises I would suggest to work on core stability.

The last video about breathing is something that helped me quite a lot. Take a few minutes to try it out and then try to adapt it to the other core exercises and notice how it feels. I noticed that when I took a breath and filled up the diaphragm, all the exercises became easier. It's also a method I use to help recover just after a race. As you come off the track you will be sucking air in uncontrollably. Try to breath in and fill up your belly. You should notice your heart rate come back down significantly quicker. You will see that some of the exercises are the same as what the other trainer suggested, but without coaching cues they are almost always done wrong. Take the time to watch the videos and learn from some great coaches on how to train the core and get the most out of your bmx training without hurting yourself.


Posted by Jake Stephenitch at 4:46 PM